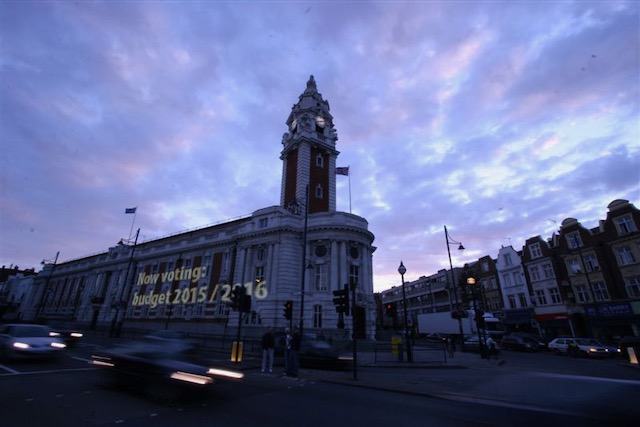 Lambeth Council are asking residents with digital skills to help them improve the services they provide. As part of this, that they are holding a hack evening (which, annoyingly, I can’t make, hence this blog post).

One of the challenges is:

how can we make it easier for people to engage with the council in decision making online, particularly those who aren’t that comfortable using the internet?

Government, particularly local government, has buildings, physical presences in its communities. Why not use those buildings to show the work that is going on in them? Turn them into info-buildings.

Info-buildings are not new. The Ayrton Light sits on top of the Elizabeth Tower (aka Big Ben) to show when parliament is sitting. On the other side of the river, the London County Council displayed unemployment figures on a large billboard on the roof (for agitation rather than engagement, but still a similar principle).

As the difference between offline and digital become increasingly academic, rather than treating them separate realms, why not merge the two? Use buildings and data together for transparency and engagement:

Use live data to display what the council is currently voting about on the side of the town hall, so people passing can better understand the work that goes on there; show a sparkline of the housing list waiting list on the side of Olive Morris House; advertise SMS numbers of open consultations to people can vote from the top deck of the bus.

The technology to do this is relatively simple - see this article on ‘Projection Bombing’ - so it should be doable, at least as an experiment, at a relatively low cost.

[Note: I’m not advocating doing this without permission!].